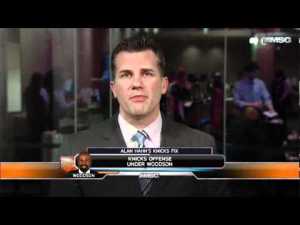 Alan Hahn is a great analyst for MSG and he took the time to answer a few questions about the Knicks for us!

360: With J.R. Smith likely gone from NY, and the Knicks having multiple salary issues, who would you be most content with the Knicks signing to fill the 6th man void?

AH: I don’t believe JR is “likely” gone. I think there is a strong mutual interest for JR to re-sign. What isn’t a given is if he will remain the 6th Man or is if he will be a starter this season. They would have to find a 6th Man then. Perhaps that’s what Chris Copeland’s role will be? He has to be re-signed, too, though.

360: With Carmelo’s impending surgery and the addition of more competing teams in the Eastern Conference, where do you expect the Knicks to be seeded if ‘Melo misses significant time?

AH: There has yet to be any official announcement about surgery, only reports that he “may” need surgery. If he does, it’s not expected he will miss significant time. To predict where the Knicks will finish next season when we’re not even out of June would be quite premature.

360: Carmelo Anthony and Amare Stoudemire have never been able to play well together. Do you see Woodson playing Amare late in games, even though he and Carmelo’s styles of play don’t mesh?

AH: “Never” is inaccurate. “Consistently” is more accurate. Amar’e is an unpredictable entity right now because of his knee issues. The coach’s job — along with the point guard — is to make their talents mesh. In regards to the end of games, a lot of it depends on matchups and how the game is going. We saw a few games this past season when Amar’e/Melo have been on the court together at the end, but a lot of the time Amar’e wasn’t there. It’s impossible to predict what Woodson is going to do when you don’t know if Amar’e is going to be healthy enough to play important minutes.

360: Chris Copeland played very well towards the end of this season. What do you think his role will be next year?

AH: Sixth Man, if JR Smith moves into the starting lineup. If JR remains a reserve, Copeland, if he’s re-signed, would be a key reserve. It’ll be interesting to see how his presence impacts the minutes available for Steve Novak.

360: There have recently been rumors that the Knicks are considering Tim Hardaway Jr. with the 24th pick. Considering that Mike Woodson and the Knicks staff are still developing Iman Shumpert’s talent, what do you think of this rumor?AH: I think of it as I think of all rumors: it’s a rumor. When you’re picking in the bottom third of the first round, you go for the best player available. You can’t “target” any one player because they could be off the board. You have a group of players, in order of preference, and you see who is there when you’re on the clock. In 2011, the Knicks had Iman Shumpert and Chris Singleton on the board. Despite popular opinion, which said Singleton was the “rumor”, the Knicks went with Shumpert, which, in hindsight, was the right choice. Doesn’t always work out (see Renaldo Balkman). Secondly, just because the Knicks take an athletic wing player, it doesn’t mean they want to trade Shumpert. As we saw with the Spurs and Pacers, you can’t have enough athletic wing players.

360: Mike Woodson made some significant coaching mistakes during the postseason. Do you think that his job with the Knicks is safe?

AH: He is under contract for another season, with an option for a third season. He just won 54 games and a division title. While every coach makes mistakes (see: Gregg Popovich in Game 6), you have to also acknowledge things he’s done right. He’s coached the Knicks to their best success in over a decade. Now saying that, his challenge is to improve on this past season and contend for a title. He will have to be judged on that very high standard going forward.

360: Raymond Felton played outstandingly during the playoffs. Do you think that he’ll be able to captivate that talent and use it during the regular season?

AH: He’s just coming into his prime so there’s no reason to think he will regress. For Felton, it’s always about three C’s: conditioning, confidence and consistency. He had to play a lot of minutes during the season and what the Knicks need to do is find him a capable backup that can give him a break from the PG role and also allow him to play off the ball at times as a scorer.

360: The Knicks recently signed Steve Novak, who is no more than a sharp-shooter, to a very large contract. How would you evaluate this deal so far?

AH: They did not get bang for their buck last season. He still shot over 40% from three-point range, but he has to evolve into more than just a catch-and-shoot player. He did improve defensively, but still has to command more playing time.

360: The Knicks made a great midseason signing of Kenyon Martin during this past season. Do you think that he will continue to have the large role that he had last season?

AH: I don’t know if Kenyon will return next season. He is a free agent and there are a lot of decisions to be made with the roster. The first question is, does Kenyon want to re-sign at the veteran’s minimum? That’s all the Knicks can offer.

360: Tyson Chandler won DPOY 2 seasons ago, yet the Knicks have looked into drafting centers Kelly Olynyk, Gorgui Dieng, and Jeff Withey for this upcoming draft. Do you think that Chandler should be worried for his starting job?

AH: Personally, I don’t expect any of the names you presented as serious threats to Tyson’s starting job now or in the near future. Remember, his contract expires in 2 years so that’s all we can go on, the next two years.

This entry was posted on October 6, 2013 by smarkowitz1 in Interviews.