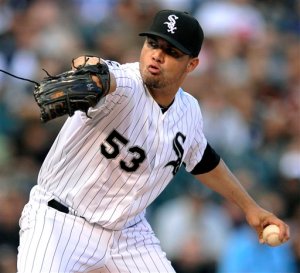 We got the opportunity to interview the great, young pitcher for the Chicago White Sox, Hector Santiago.

360: On May 7th of this year, you faced off against Matt Harvey in Citi Field. Considering that you grew up in New Jersey, just 30 miles from Queens, many of your family and friends were able to see you in this matchup! They certainly got their money’s worth as you allowed just 4 hits over 7 scoreless innings. What did this unique experience mean to you?

HS: That day against the Mets was one of the best moments, because there were so many people there that probably wouldn’t have been there [if I wasn’t in New York]. I was in the bullpen because I didn’t know when I would throw. So it was fun hearing them yell every inning, every out.

360: Who is the toughest batter that you’ve faced?

HS: Joe Mauer, because he doesn’t chase pitches, he has such a good approach, and he knows the strike zone extremely well.

360: What are the most memorable moments of your baseball career thus far?

HS: The day that I was called up to the big leagues, no doubt. Phillip Humber’s perfect game was pretty awesome too.

360: Do you prefer pitching in relief, or starting?

HS: I like starting more than I do relieving.

360: Who is the funniest person on the White Sox?

HS: I didn’t choose the #53. The White Sox give us whichever number they want to give us.

This entry was posted on October 6, 2013 by smarkowitz1 in Interviews.