What are the Giants’ problems and how can they be solved? 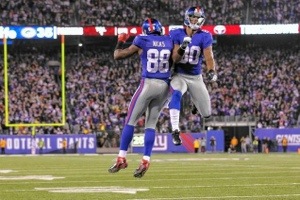 QB: Eli Manning- I know that I may get a lot of heat for this, but I truly don’t think that Eli should be blamed much at all for this dreadful start to the season.Think about it- Coughlin’s distrust in David Wilson and Brandon Jacobs calls for an offensive game in which Eli has to throw on about 70% of the plays. He’s also had to deal with, in my opinion, the worst O-Line in the league. Manning doesn’t want to be sacked, so he’s forced to throw the ball away very often, which usually results in an interception. Eli Manning has always been known to throw picks, but he throws for touchdowns and yards, making up for this fact. Eli Manning-B-

FB: John Conner- He has yet to play a game for the Giants. He was signed after Henry Hynoski went down with an injury. John Conner- INC

RB: David Wilson, Brandon Jacobs- Wilson hasn’t been good this year. BUT, if you look back, he hasn’t been very bad, except for Week 1. For whatever reason, he is resented by Tom Coughlin, so he has very few chances to redeem himself. Before he got injured yesterday, it looked as though he was going to have a breakout game. Expect a much improved David Wilson for the rest of the season. Brandon Jacobs was mainly brought in to play the backup role. While his presence has been felt in the touchdown that he scored, he hasn’t brought to the team much leadership or goal-line runs, which he was expected to do. David Wilson-C+; Brandon Jacobs-F

WR: Reuben Randle, Hakeem Nicks, and Victor Cruz- the three of them have done just what has been expected… Even with Eli’s shortcomings, they’ve still managed to form one of the best receiving corps in the NFL. They’ve combined for 1,103 yards and 6 touchdowns. While Nicks, before this week, hasn’t been as good as he has in the past, he’s still excelled. Cruz has been extraordinary this year, even with the down week against the Eagles. Randle has exceeded expectations. While most expected him to breakout sometime, very few expected for it to be this year. Victor Cruz-A+. Hakeem Nicks-B-. Reuben Randle-B-

TE: Brandon Myers- I expected Myers to have an excellent year, because of two major points. With Carson Palmer as his QB, he had 4 touchdowns and 806 yards. Knowing that Eli Manning has been a “tight end machine”, it appeared as though Myers would eclipse 1,000 yards and 7 touchdowns. Despite what history would lead one to believe, Brandon Myers has been an utter disappointment this season. Brandon Myers-D+

Offensive Line: Will Beatty, Kevin Boothe, David Baas, Brandon Mosley, Justin Pugh- as I said before, this is the worst offensive line that I’ve ever seen. Need I say more? Unit Grade-F

CB: Prince Amukamara, Corey Webster- Amukamara has been the #1 CB this year for the Giants, and he’s put up incredible numbers. He’s allowed just 304 yards and 2 touchdowns to Dez Bryant, Demaryius Thomas, Steve Smith, Dwyane Bowe, and DeSean Jackson COMBINED, and he also had an interception against the undefeated Chiefs. He, in my opinion, has proven to be a top-5 CB in the league with his performance thus far. Webster, who has only played in two games, allowed 159 yards to Miles Austin and Eric Decker, combined. While one can’t say he’s playing well, Webster has certainly improved from his dreadful 2012 season. Prince Amukamara-A; Corey Webster-C

Defensive Line: Justin Tuck, Linval Joseph, Cullen Jenkins, Mathias Kiwanuka- This unit has 60 tackles COMBINED- just nine more than the league leader, Lance Briggs- and 3 sacks. They’ve been awful! With JPP and Linval hurting, this can’t come as a surprise, though one would expect Justin Tuck to step up more than he has (he has stepped up to a point, with the most tackles, but not as much as they need). Justin Tuck- C+; Linval Joseph- C+;Cullen Jenkins- F; Mathias Kiwanuka- D

Linebackers: Spencer Paysinger, Mark Herzlich, Keith Rivers- The linebacking unit has been awful too, but not nearly as bad as the defensive line. Paysinger has made his presence known with 33 tackles and 1 sack, the best of any of the teams’ LBs. Herzlich has also been solid, with 26 tackles, though he’s yet to record a sack. Rivers has been absolutely dreadful, with 14 tackles and 0 sacks. Spencer Paysinger- B-; Mark Herzlich- C; Keith Rivers- F

Safeties: Antrel Rolle, Ryan Mundy- Antrel Rolle has had a solid contribution to the team on the field, with 22 tackles and 1 INT. But, he’s mainly been the clubhouse leader for this team. He’s been trying to say and do whatever possible to stop this dreadful run that the Giants have been on. Mundy, a surprising contributor, has a team-leading 42 tackles, along with a 91-yard INT in the opening game. Antrel Rolle-C+; Ryan Mundy- B+

Head Coaching: Tom Coughlin- He has made some awful decisions this year. His distrust in David Wilson has been evident, and it’s clearly hurt the team. He has had the worst coaching season, in my opinion, of his career. I respect him, and love what he’s done for the Giants Organization, but I unfortunately think he has to go. Tom Coughlin- F

How to Solve these Problems:

QB: When the Giants are mathematically eliminated from playoff contention, they should start Ryan Nassib. The team should make a public statement saying that Eli is in absolutely no danger of losing his job, and the team just wants Nassib to get a better feel of the system. If he continues to improve, they could either trade him for a lot of value, or he can be the Aaron Rodgers to Eli’s Brett Favre.

FB: There isn’t any serious concern at FB. When Hynoski comes back, they should be perfectly fine here.

HB: Coughlin should learn to trust David Wilson much more. He should understand that this is just Wilson’s second season and people make mistakes- look at Adrian Peterson. He was known as the NFL’s worst case of “fumblitis” for years, and he’s managed to overcome that and be the best HB in the league. I also think that they should draft an RB in the mid-rounds, such as Lache Seastrunk, Silas Redd, to complement Wilson, so they don’ t have to retain Jacobs.

WR: The WR corps are set for the Giants. Randle, Nicks, and Cruz are excellent! They might even decide to trade Hakeem Nicks for some high draft picks.

TE: They could make a huge run at Jimmy Graham, but this seems very unlikely. More realistically, they can try to draft Oregon’s Colt Lyerla in the 2nd or 3rd round.

Offensive Line: They might go ahead and draft Taylor Lewan or Cyril Richardson in the 1st round. I also think they should go after some FA offensive linemen like Jared Veldheer, Brian de la Puente, and Alex Mack.

CB: Amukamara is great, but they need to replace Corey Webster! Brandon Browner, Dominique Rodgers-Cromartie, Nnamdi Asomugha, and many more very good CBs are free agents that would be excellent additions!

Defensive Line: They must go and draft Jadeveon Clowney! Even if they end up with the 5th pick or so, the Giants should package that and another pick for Clowney. A line with JPP, Jadeveon Clowney, and the leadership of Tuck and Kiwanuka, would be outstanding!

Linebackers: Paysinger and Herzlich are fine, but they really need to replace Keith Rivers! They could draft Kyle Van Noy, Christian Jones, or Lamin Barrow in the mid-rounds. They could also possibly go after Brian Orakpo this offseason.

Safeties: Ryan Mundy is a strong player at this position, and Antrel Rolle is still a good player, and a great leader to the team. If anything, they could draft a safety in the late-rounds, such as Tre Boston and CJ Barnett.

Kicker/Punter: The punting situation with Weatherford is fine, and they don’t need to fix this at the moment. Josh Brown must be replaced, and they can do one of two things. First, they could draft Tulane’s Cairo Santos or Alabama’s Cade Foster. Also, Phil Dawson, David Akers, and more good kickers are free agents.

Head Coach: I hate to say this, but they must fire TOM COUGHLIN! They should fire him and replace him with Kevin Sumlin, Nick Saban, Bill Cowher, Jon Gruden, or Bill O’Brien. I believe that the best and most realistic options are Cowher and O’Brien!

This entry was posted on October 7, 2013 by smarkowitz1 in Analysis, NFL and tagged Giants, NFL, NY Giants.