Why The NFL Trade Deadline Will Be Unexpectedly Quiet?

The NFL teams typically make very little trades, but this season is an exception. In recent years, the biggest trades at the deadline includes a typically washed up/dissapointing player who is usually dealt for late round picks. One example of these trades includes when the Patriots gave up a 6th round pick to the Tampa Bay Buccaneers for dissapointing cornerback Aqib Talib. This was a big acquisition because Talib has been a huge shadow corner for the Patriots who shut down Jimmy Graham in week 6.

This season has been an exception to the typical amount of trades. There has been 5 trades so far in the regular season including the Browns trading 2012 1st rd. pick Trent Richardson to the Indianapolis Colts. This season teams have made more trades to attempt to fix a soft spot on their team. For example, the Giants traded for Jon Beason to help save their season by bolstering their defense with a very good tackler. Some teams are just trying to acquire picks because they know that they have zero shot at making the playoffs like the Browns. The Browns traded Richardson, which landed them a first round pick.

Some players that have recently been brought up in trade rumors include:

Josh Gordon will most likely not be dealt because the Browns want a huge haul for their ultra talented wide receiver and not many teams are willing to bite, thus far. Gordon has been involved in trade talks frequently especially teams with teams like the San Francisco 49ers, Indianapolis Colts, and Atlanta Falcons. I doubt that Gordon will be dealt because of his trouble with the league. He started the year with a two game suspension and has made it clear that he knows that this his last opportunity. Gordon is still a huge risk even though his upside is sky high.

I doubt that the Arizona Cardinals are going to give up a super talent like Larry Fitzgerald after he scored a touchdown and is starting to grow a strong rapport with Carson Palmer. The Cardinals offense was rolling on Sunday and it doesn’t seem as if the receivers have been the issue for Arizona thus far. If Larry Fitzgerald were to get traded, I would be very surprised. 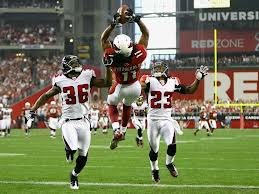 Justin Blackmon has been the lone bright spot in the Jaguars offense this season. They feel as if they could get a decent return for a receiver who has carried the load since returning from his suspension. Blackmon has been thrown into trade talks because he has the most value and they want to stockpile draft picks. Trade talks have been discussed with Indianapolis and Atlanta. I doubt that these teams will trade for the former first round pick because the Jags will want too much in return given the risk in his legal history.

Jared Allen is considered a corner stone of the Vikings defense and has been brought up in trade discussions basically because this Vikings team is horrendous. Many teams like the New York Jets will look to add Allen because they need to bolster their defense in order for it to be considered an elite defensive front. Allen has lately been backed by the organization and seems unlikely to be traded.

Adrian Peterson is last years MVP and no one would have predicted that he might have been one of the hottest names at the deadline. Peterson has had a dissapointing year so far. At the beginning of the season, AP was incredible including a 78 yard touchdown run on his first play from scrimmage. AP has been rumored in deals with teams without a true starting running back like the Dallas Cowboys. After last weeks loss to the Giants, AP was brought up in a plethora of trade talks. I doubt he gets traded because he is the best player in the league and no trade can equate to what AP ALL DAY gives to your team. 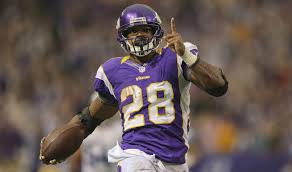 Hakeem Nicks is an extreme talent, but has struggled with numerous injuries in his career. Nicks has huge hands and is a great red zone threat for Eli Manning. Nicks’ combination of speed and strength makes for a tremendous receiver. However, health has been a huge issue so far in his career. The Giants want to get rid of him so badly because of the emergence of Rueben Randle. Randle has been good so far and has the potential to be a very good second wide receiver lining up opposite of superstar Victor Cruz. Nicks is a good pickup for any team that needs a wide receiver and doesn’t wanted to give up a lot like the Indianapolic Colts. However, I think the Giants are better off hoping that Nicks can stay healthy and become an excellent receiver.

I don’t believe that many stars will be traded tomorrow before the NFL Trade Deadline, however my one prediction is that Josh Gordon is traded to the Atlanta Falcons. A core of Gordon, Julio Jones, and Roddy White next year is easily a top receiving core in the league.