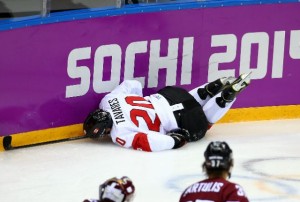 The 2014 Sochi Winter Olympics are still bright in our minds, and the mens hockey games were particularly entertaining. Canada, led by Sidney Crosby, took home the gold for the second straight Winter Olympic games. One of Canada’s young, bright stars in John Tavares has proven, over the past few years, to be one of the best superstars in the NHL, and he is the promising young centerpiece in solving the troubled New York Islanders’ constant issues. However, he fell to an injury during the Olympics, and he’ll be unable to play for the rest of the NHL season. This was a major blow for the entire NHL, losing one of their star players, and particularly the Islanders, as it practically made it official that they wouldn’t surprise hockey fans and make their second straight playoff appearance. The Isles’ GM, Garth Snow, has argued that NHL players shouldn’t be allowed to compete in the Olympic games. What’s your take on this issue?