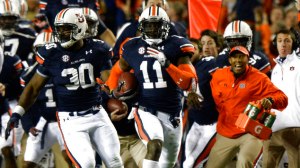 Auburn pulled out a crazy win over Alabama on Saturday in the Iron Bowl, with a last second runback of a missed field goal.

Florida State has basically clinched a spot in the Title Game, barring a shocking loss to Duke in the ACC Championship Game.

Ohio State is undefeated, though they have little to no impressive victories. Even still, they’re #2 in the rankings. They play Michigan State in the Big 10 Championship game.

Many are wondering if it’s possible that Auburn/Mizzou leapfrog Ohio State and plays FSU in the BCS Championship game.

What do you think?

This entry was posted on December 2, 2013 by smarkowitz1 in Vote, Whoa or No.